If you really knew me 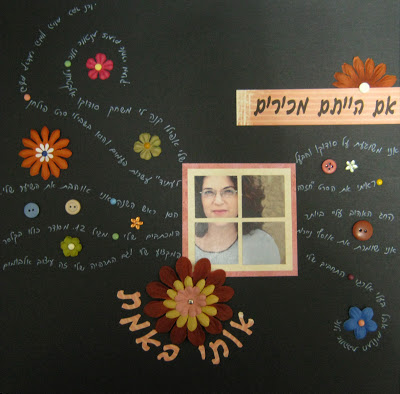 I usually design for my clients or my kids. For once I decided to design a layout for myself about myself. It’s a very simple layout in terms of design, but not so simple (to me) in terms of exposure. Since it’s all in Hebrew here is the translation. The title: If you really knew me. The journaling is a collection of sentences describing me: I love Sudoku and my husband bought me an electronic Sudoku game, I saw the movie “Back to the Future” many times and it’s my favorite movie, My favorite holiday is the Jewish New Year, I always eat an olive after I ate something sweet, I still have my stickers collection from when I was 12 years old, I love cats but my husband is allergic, I like my hair. Now you know almost everything there is to know about me. Try making a layout for yourselves; it might be more challenging than you think. … 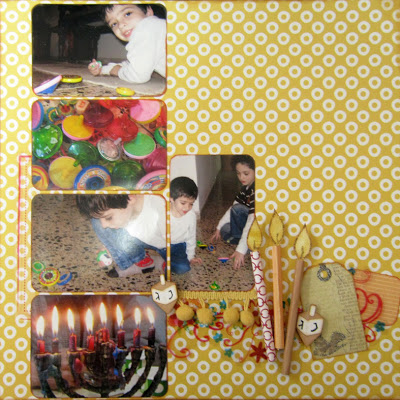 Today is the first day of Hanukkah and we light one candle. I made this layout with a few Hanukkah photos from last year for My Punch November kit. I used a cool technique to create the 3D candles. Here is how it’s done: • Cut 3″ X 2″ rectangular pieces from patterned paper. • Roll up each piece of paper and adhere the edge. • Cut flame. Embellish with stickles, ink or paint. • Attach the flame to the candle by adhering it to the inside of the roll with a piece of 3D foam tape. Embellish your Hanukkah, Christmas or any other layout with these beautiful cool candles. Tune in tomorrow for the Sizzix Triple Blog Hop with a fun project. Einat 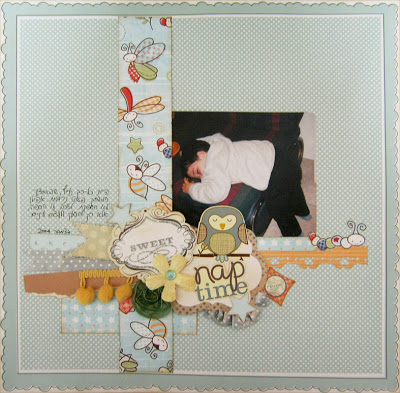 When you have small children you discover they fall asleep in the strangest places. It is as if they have a switch that turns them off and they simply fall asleep where ever they happen to be at that moment. This layout tells such a story. This is a photo of my son a few years ago. He was so tired he didn’t even go to bed or lie down on the couch; he just put down his head and went to sleep. He still holds his toy car in his hand, half standing… This is a DT layout for My Punch’s October kit. The journaling is: “You were so tired that you fell asleep while playing. You didn’t even lie down; you just leaned on the couch and went to sleep. Adorable don’t you think? Einat 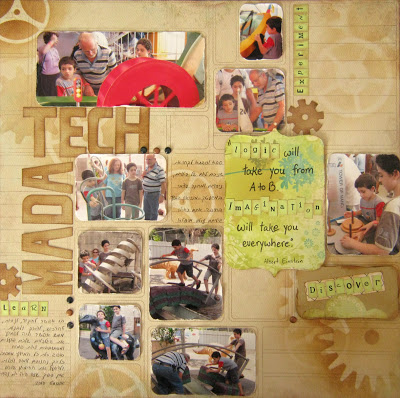 These photos were taken in the MADA-TECH (Mada – means science in Hebrew), one of the two Israeli museums of science. It might not seem a lot, but in a country smaller than Lake Michigan it’s not bad. My father, a science fan himself, decided to take the kids to a fun day at the museum. They had the time of their life, going from one room to the next. Each room had a different subject and it is all children’s friendly so they are meant to test, pull, push, build and touch everything. And they did! I could see them getting curious and absorbing all the information. It was defiantly a fun day! This was a layout I did for My Punch’s Kit of the Month Club so I had to create a “scientific” page with what I had. I used cog wheel masks in the background and added words like experiment learn and discover. I especially like the … 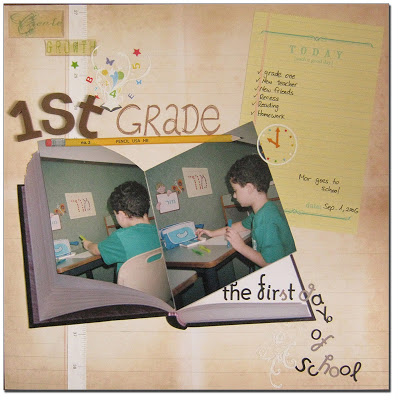 I know it’s not the beginning of the year, but I love this layout I did when my oldest son started school (about 5 years ago) and I didn’t have a chance to post it on my blog until now.. This day was very special, it wasn’t just a first day of school; it was the first day of the first year in school with a new classroom, a new teacher and new friends. He was very excited and so was I; he didn’t cooperate with the camera so I only managed a few photos. For this layout I decided to use a book, as if this is part of a story. I cut the photos to fit the pages in the book and arranged the letters as if they were falling of the book. It is so amazing to watch how he has grown and learned new things. I am a very proud mother! 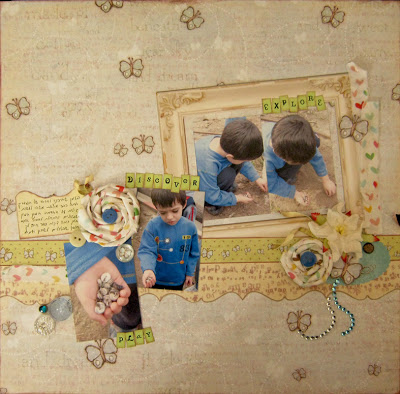 In this age of television and computers we often hear the words: “mom, I’m bored”. But sometimes, as I found out, they can surprise you. These photos were taken on a trip to the beach with my son’s kindergarten a few years back. We were all sitting waiting for our guide to arrive and all the kids were complaining that there was nothing to do. My son found a solution…he started collecting snails. It was the season when all the shells were left behind and he collected them like it was the biggest treasure he ever saw. He kept himself occupied for a long time collecting and playing with the snails. A scene worthy of a photo, don’t you think? The layout is one of the projects I created using the October Kit of the Month club by My Punch. 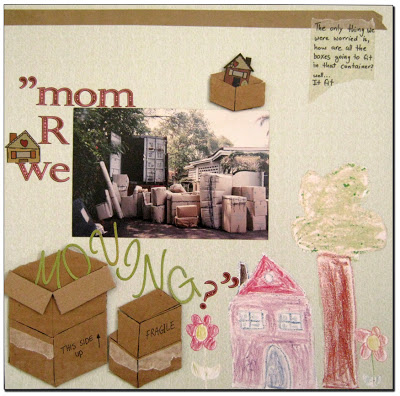 That was the question my son asked me when he saw all the boxes everywhere. A few years back, we lived in Kenya for a few years and when it was time to leave we packed the house in soooo many boxes I was afraid they would not fit in the container. As it turned out every box found its place in the container and luckily they even managed to close the doors. For this layout I created a special paper with my son’s drawings. He drew a house and a tree and I thought it would make the most adorable pattern for a paper on moving. I created the boxes from corrugated cardboard I cut from real boxes and I embellished the page with two types of masking tape.